640 Primary School Students Have a Desk to Sit at!

Trax Ghana, in partnership with Best of Both, British School of Brussels has brought a massive improvement in the daily lives of 640 Primary School Students in the rural parts of the Upper East Region. From the 2014-2015 academic year, these students do not need to lie down or sit on the bare classroom floor anymore. They will be able to sit at a locally produced dual desk. A contracted driver and our School Projects Coordinator have finished transporting all 320 desks last Friday. 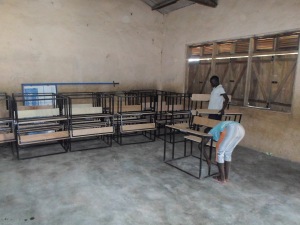 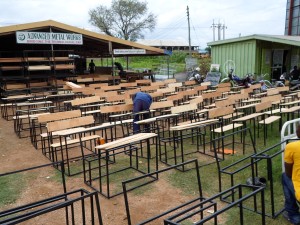 According to the size of the student population as well as the number of desks that were already available, the four schools received their share of the desks. Trax Ghana’s Schools Projects Coordinator, Botozan, brought 60 to Daachio, 70 to Zuarungu-Moshie, 90 to Gaare-Gbani and 100 to Duusi. While offloading the furniture from the truck, Botozan was assisted by community members and school staff. The schools have stored their furniture for the meantime. When the heads of the schools return they will decide on the appropriate distribution of the desks among the various classes. Botozan will be present on the first day of school, to capture the responses of the students.