Rain-Fed Farming: What Happens in the Dry Season?

The large majority of the rural farmers in the North of Ghana depend on rain-fed agriculture as their primary source of income. Unlike the South of the country, Northern Ghana has only one rainy season that normally starts in April/May and lasts until October. During the first few months rains are light and irregular. Farmers cannot plant most of their major crops (millet, maize and yam) until halfway the rainy season and thus harvest only once a year. An obvious question then rises up: is there no farming during the long dry season?

The answer is that many farmers do not farm in the dry season. Many men travel to the South to do low-skilled and often poorly paid work. Others try their luck at artisanal gold-mining (popularly called galamsay). However, there are some farmers who produce food all year long. They do dry-season gardening. 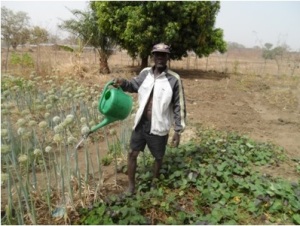 Joe Dok (54) a husband, and father of five children (3 boys and 2 girls) is one of them. He and his farmer group took part in Trax’s dry-season gardening workshops in 2012, supported by Self Help Africa. One of Trax’s field workers took them through some theory concerning the growth stages of vegetables, maturity, harvesting and post-harvest management techniques. The group was then supported with tools such as a pumping machine, a knapsack sprayer and seeds of tomato, cabbage, pepper and onion.

Mr. Dok used not to be able to provide his family with three meals a day in the dry season. However, since he started practicing dry-season gardening, Mr. Dok is able to put food on the table and cater for his family’s health and educational needs. Two of his children go to the nearby primary school, two attend secondary school and one is studying at tertiary level. Mr. Dok is a lead farmer in Sondore, the community where he stays. Apart from the vegetables, he produces onion seed and multiplies Orange Fleshed Sweet Potato vines. He is respected in the community for the community trainings he organized to share best practices.