Celebrating the Contribution of Women Farmers in Northern Ghana

This International Women’s Day we are celebrating women farmers everywhere. Women farmers constitute more than half of the labour force on small farms in Sub-Saharan Africa. Despite this, they typically have little or no ownership of land, property, or income. In Northern Ghana, Trax are working to give women farmers the rights and recognition they deserve.

We pay particular attention to gender equality in our programmes; 50% of our beneficiaries are women. Our programmes are sensitive to the different needs and priorities of women compared to men in this region.

To celebrate the women farmers of Northern Ghana, we want to profile their strength, achievements, and the contributions they make to Trax and their communities. 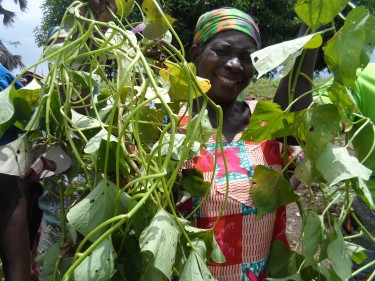 Women in Pelungu construct stone bunds in preparation for the farming season. Stone bunds prevent soil and compost from being washed off the land by rain.

As women farmers constitute half of Trax’s beneficiaries, they are recipients of programmes which support sustainable agricultural livelihoods through the practice of agroecology. Through the application of compost, use of stone bunds, and tree planting, women farmers have increased their yields by reversing land degradation and restoring soil fertility. Women have increased their yields by up to 170% using these farming practices.

Women are also the recipients of groundnut and soybean seeds, both of which are legumes which support soil fertility and are a good source of protein. Trax also support women with kits for dry season gardening, enabling them to grow vegetables using hand irrigation during the long dry season in Northern Ghana. This provides them with an additional source of food and income for thier families. 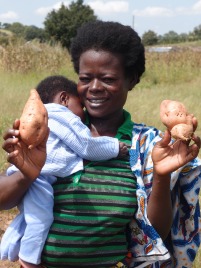 This woman cared for her OFSP crops while pregnant. Here she is seen with her baby and harvested OFSP. OFSP can support child nutrition due to high Vitamin A content.

Women have benefited from the production of orange-fleshed sweet potato, a variety bred to be drought tolerant and have higher Vitamin A content than the native variety. In just the first year of production, women supported by Trax had yields of OFSP which were higher than the regional average.

Trax introduce sustainable agricultural practices to the farming communities we support, but it is the farmers themselves who make them so successful. In these examples, it is women farmers who have achieved high yields of nutritionally-valuable crops. They have done so while caring for their families and supporting their communities. 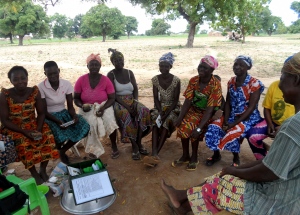 Women in Pelungu at their weekly VSLA meeting

In several communities in Upper East Region of Ghana, Trax have supported women farmers groups to establish Village Savings and Loans Associations (VSLA). The women govern the running of the VSLA themselves. 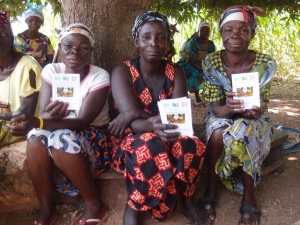 Women in Nakpalig with their VSLA books

During a weekly meeting, each woman will make a small deposit to their collective savings. The women are able to take small loans from the VSLA to respond to any emergencies during the year. At the end of each year, the women receive their savings back with interest. This is not just a financial initiative but also brings the women together in collaborative governance and support for one another, and it is empowering becuase they have access to finance and ownership of the process.

Trax supports women’s empowerment in farming communities in Northern Ghana. One such way in which we are doing this is through our goats payback scheme. Through the goats payback scheme, women have ownership of the livestock and any funds raised they can use to contribute to their household. The goats payback scheme is sustainable because each woman ‘pays-back’ three goats once they have kidded, and these are given to another woman farmer. 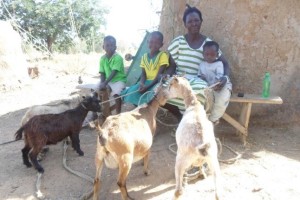 Comfort Adongo with her goats

Comfort Adongo (45) is a farmer at Kabusgo in the Bongo District, Upper East Region of Ghana and is the mother of six children.

In 2013, Comfort benefitted from the goat payback scheme and received 2 nannies and 1 billy. After the nannies kidded, she paid back three goats to another beneficiary (woman) in the community in 2015, leaving the remaining stock of six (6) goats as her profit. She also collects the droppings of the goats as manure for her farmland.

Comfort sold two goats and used the proceeds to pay part of the school fees of her daughter who is in Gowrie Senior High School. Comfort now sees herself as someone who is empowered through the goats scheme to contribute to the upkeep of the family. She can still boast of four healthy goats with the nannies currently pregnant. 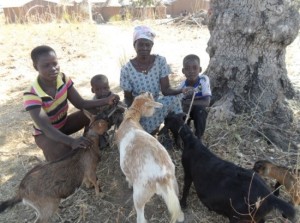 Tekimore Dong with her goats

Mrs Tekimore Dong (52) is a farmer at Golung, Upper East Region of Ghana and is the mother of five children, 3 girls and 2 boys. As a single mother, she didn’t have any sustained source of income for the family upkeep.

In 2010, Tekimore received 2 nannies and 1 billy as seed capital. After the nannies kidded, she paid back three goats to the next in line beneficiary in 2012, leaving a stock of seven (7) goats as her profit. Tekimore then sold three goats and used part of the proceeds to register and pay the premium for her children under the National Health Insurance Scheme (NHIS). She used the remaining money to start a table-top provisions business at the Pelungu market. Every market day, she sells her table-top provisions and generates income which she uses to look after her family as a single mother. She can still boast of four healthy goats.

For International Women’s Day 2017, Trax are celebrating the essential contribution which women farmers are making to their households and communities in Northern Ghana. We recognise that they contribute more than half of the labour for farming, yet do so while caring for their families. 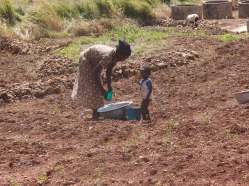 A women in Duusi waters her seedlings with her son

In Northern Ghana, women are being empowered by taking ownership of the livelihoods and incomes. Their strength in this undertaking is inspirational.

To women farmers in Northern Ghana, and everywhere, we salute you.